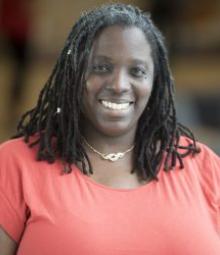 Dr. Nneka Sederstrom, originally from Florence, Alabama, received her BA in Philosophy from the George Washington University in 2001. She began her career as a volunteer in the Center for Ethics at Medstar Washington Hospital Center that summer. She continued her academic career while working at the Center and received her MA in Philosophy in 2003. After beginning her PhD studies she was made Director of the Center for Ethics and Director of the Spiritual Care Department. She proceeded to hold these positions until she left to join Children’s Minnesota in March 2016. Her academic credentials include a PhD in Medical Sociology and MPH in Global Health Management.

Nneka is married to Charlie Sederstrom (also at Children’s Minnesota) and they have a little boy named Grayson. She loves to bake, knit, and yell ‘Roll Tide!’