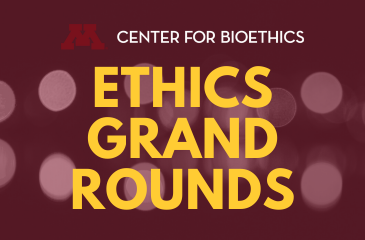 Bioethics and the Crisis of Global Ecology

A disappearing arctic ice cap. Rising oceans. Once in a century floods are occurring annually, even as deserts expand. Plastic and chemicals cover the seas and lands. Pollinating bees are disappearing as agriculture defends the chemicals that kill them. Tropical diseases are migrating north into temperate zones that are warming to greet new species of mosquitos.

Some say we are living in an “Anthropocene Epoch” where humans rather than natural forces are transforming the planet. Does bioethics have anything useful to say? Dr. Miles explored the history and future directions for bioethics. This talk was based on a collaboration with Susan Craddock, PhD.

Steven Miles, MD, Professor and Maas Family Endowed Chair in Bioethics, Center for Bioethics; and Department of Medicine, University of Minnesota Medical School | Prof. Miles served as President of the American Society of Bioethics and Humanities and received its Distinguished Service and Lifetime Achievement Awards. Among his other awards are the National Council of Teachers of English George Orwell Award for Distinguished Contribution to Honesty and Clarity in Public Language, American Bar Association-Section of Individual Rights and Responsibilities, Human Rights Hero, and the Sullivan-Ballou Fund Award for Human Rights, the Shotwell Award for Lifetime Contributions to Medical Ethics.

Dr. Miles has published thirty chapters and more than 200 medical articles on medical ethics, human rights, tropical medicine, end of life care, and medical torture. The Hippocratic Oath and the Ethics of Medicine (Oxford University Press, 2004) reviewed the meaning of the Hippocratic Oath. Oath Betrayed: America's Torture Doctors (University of California Press, 2006) examined military medicine in the war on terror prisons. The Torture Doctors: Human Rights Crimes and the Road to Justice (Georgetown University Press, 2020) reviews physician complicity with torture on an international scale. He has extensive international experience including global work with refugees and work on behalf of victims of torture. He currently serves on the board of the Minnesota ACLU Foundation, the editorial board of Torture Journal (Denmark) and is a Master Gardener.